Lesnar stunned the WWE Universe at Money in the Bank as he added himself during the closing moments of the Men’s Ladder Match and retrieved the briefcase containing a contract that promises him a title shot at any time and place he wishes within the next 12 months.

The Beast joined the action just when Ali was ready to unhook the briefcase and pick up a shock win but was knocked off the top of the ladder amid a chorus of boos from the audience.

WWE fans are not happy with the fight’s finish as they are still very frustrated with The Conqueror’s part-time schedule and believe he stole the spotlight from a more deserving young talent.

Ali seems to agree with those sentiments as he took to Twitter to express his thoughts on the Pay-Per-view show’s controversial ending.

Look at the bright side, @brocklesnar climbing a ladder is the most wrestling he’s done all year

The former 205 Live superstar claimed Lesnar’s small role in the match was “the most wrestling he’s done all year”.

Ali tweeted: “Look at the bright side, @brocklesnar climbing a ladder is the most wrestling he’s done all year.”

Fellow WWE superstar Randy Orton agreed with that statement as he retweeted the cruiserweight’s post.

Orton decided to poke some fun on the situation with a cheeky statement before confirming that he approves that tweet. 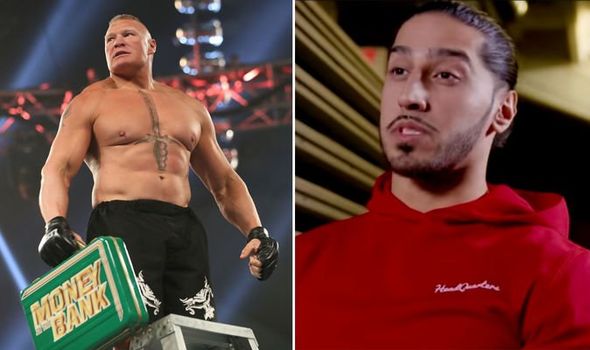 Lesnar will reveal next week on RAW when he is planning to cash in his contract.

Rumours suggest he will go after Universal Champion Seth Rollins at WWE Super ShowDown on June 7 at the King Abdullah International Stadium in Saudi Arabia. 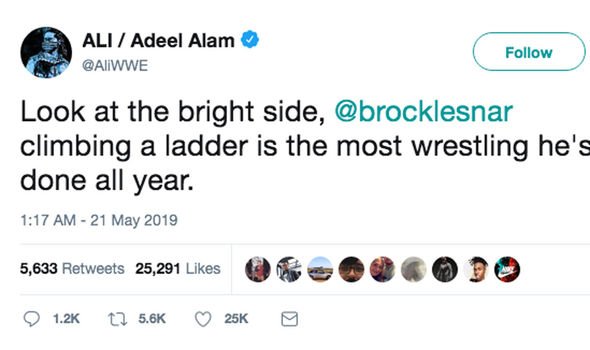 The UFC legend also seemed to have WWE Champion Kofi Kingston on his sights last Monday night on RAW.

However, the six-time world champion may decide to go after Rollins instead as he has unfinished business with him after WrestleMania 35.

The Beastslayer defeated Lesnar for the Universal Championship at WrestleMania four months after winning the Men’s Royal Rumble Match.

Looking back at The Undertaker’s 5 best moments in WWE