Ronda Rousey has trolled the WWE Universe which expected her to return at the Royal Rumble. Rousey hasn’t been seen in WWE TV ever since her first ever loss in professional wrestling last year at WrestleMania 35 where she was defeated by Becky Lynch in a historic Triple Threat Match for the RAW Women’s Championship, which also included Charlotte Flair.

You really thought that I was going to come back tonight?

Rousey has repeatedly stated that she is solely focused on starting a family with her husband Travis Browne but has also claimed she still misses the WWE and isn’t ruling out a return to the squared circle.

A number of fans were expecting to see her make her highly-anticipated comeback during the Women’s Royal Rumble Match, which is an event notorious for its surprise entrants.

However, The Baddest Woman on the Planet was once more absent and the bout was won by her former rival Charlotte who eliminated the MMA hero’s friend Shayna Baszler at the end.

The UFC Hall of Famer then took to Twitter where she channelled her inner heel character and poked some fun at the WWE Universe. 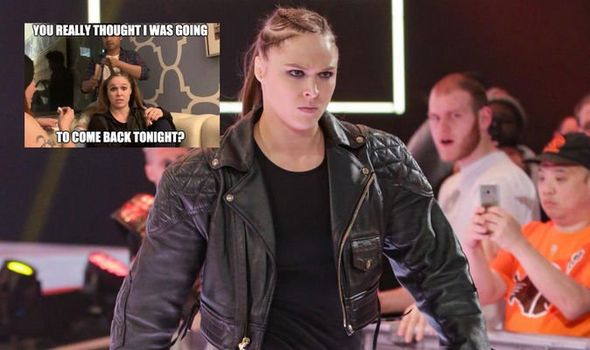 Rousey shared a screen shot of herself from a video in which she was ripping fans to shreds ahead of WrestleMania last year.

The first ever UFC Women’s Bantamweight Champion captioned the image with: “You really thought that I was going to come back tonight?” 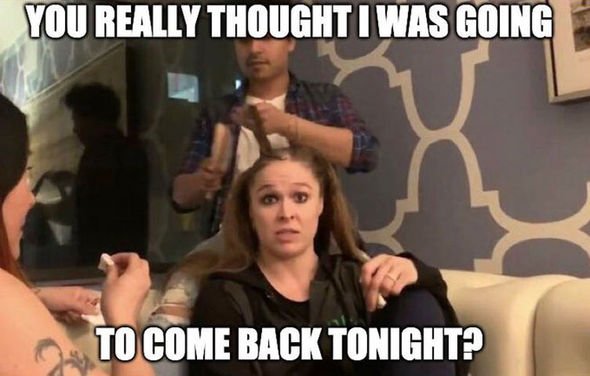 Rousey hinted that her WWE career is over during her last appearance on the hit reality TV series Total Divas.

The ex-RAW Women’s Champion felt like her job was done after the historic WrestleMania match in which she, Lynch and Charlotte became the first ever women to compete in the main event of the Show of Shows.

Rousey said: “I made a decision about my future and life and everything.

“I’m gonna do everything that I can to bring a spotlight to the women’s evolution. Then, I’m gonna go have a baby.

“In a strange way, I feel like my job is done.”

Rousey then took to Twitter to hype that episode of Total Divas by describing it as the “climax” of her WWE career.

She tweeted: “#WrestleMania is finally here and I’m ready to go out in flaming glory!!! Don’t miss the climax of my @WWE career on @totaldivas.”

WWE Executive Vice President of Talent, Live Events and Creative Triple H, though, has repeatedly claimed that Rousey will come back to the ring one day.

WWE Superstar Shake-Up confirmed: Which stars were traded on Raw and SmackDown

5 things we learnt from Smackdown live ahead of Elimination Chamber